Home / Who we are / Janet Bazley QC 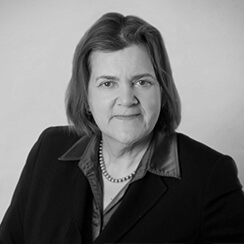 Janet is Joint Head of Chambers at 1GClFamily Law, one of the largest specialist Family Law sets in the country. Janet is rated as a Leading Silk (Band 1) in both the Legal 500 and Chambers UK Legal Directories.

Janet maintains a broad family law practice. Much of her work comprises private law disputes about children, including internal and international relocation, as well as dispute about other arrangements for children and, increasingly, work involving modern families. Janet also receives instructions in complex care cases (generally involving medical issues) and in family finance cases. Much of Janet’s work has an international element and she has been involved in many cases which have changed the law. Instructed on behalf of the children’s Rule 16.4 guardian, Janet appeared before the President of the Family Division in the first series of cases involving errors on the part of fertility clinics, resulting in the court being asked to make declarations of parenting in respect of the children born by assisted conception: In the matter of the Human Fertilisation and Embryology Act 2008 (Cases A, B, C, D, E, F, G and H) [2015] EWHC 2602 (Fam).

Janet, has always had a keen interest in out-of-court dispute resolution and was interested, from the outset, in the development of schemes for arbitration in family finance and children cases. Having trained as an arbitrator for finance cases, Janet was on the committee which advised the Institute of Family Law Arbitrators (IFLA) on the setting up of the children scheme. She was invited to assist with the preparation of materials and the delivery of the children arbitration course run by IFLA. Janet has also conducted several arbitrations. She is keen that the scope of the children scheme should be broadened to permit arbitrators to determine international relocation cases to Hague destinations.

By way of other dispute resolution Janet conducts early neutral evaluations in children cases and is regularly instructed to conduct private FDR’s, in particular in Jersey.

Janet also sits part-time as a Recorder, in both civil and family cases.

The Legal 500 for 2019 says that Janet ‘Remains calm in the eye of the storm’ and that she is ‘highly regarded for her extensive experience of complex, law-making, children cases’ with ‘notable expertise in cases involving technical medical or forensic evidence’… also that she ‘regularly acts in cases involving the international relocation of children, and those concerning issues relating to modern families.’

Chambers UK 2019 says that Janet’s ‘steadfast composure and kind approach to clients, her unwavering commitment to putting the client’s best case forward, and keen eye for strategy, make her an outstanding leader’ and that ‘She is utterly brilliant, always well prepared, and with some amazing client care skills. She has a quiet manner in court, but has the ear of the judge.