Home / Who we are / Barbara Corbett 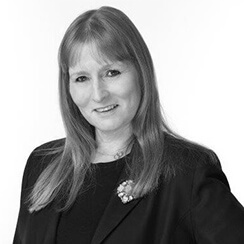 Barbara Corbett is a Jersey Advocate and English Solicitor with over 20 years’ experience as a family lawyer. She is the Senior Partner at Corbett Le Quesne. Barbara is a collaborative lawyer, mediator, family arbitrator, international family lawyer and a specialist children’s lawyer.

Barbara has expertise in all areas of family law and is committed to helping clients resolve problems in a positive and conciliatory manner wherever possible. In addition to her considerable experience dealing with divorce and financial settlements Barbara also advises clients on the preparation of pre-nuptial and other relationship agreements. Many of Barbara’s cases have an international element, she frequently advises foreign lawyers on Jersey law especially in respect of cross jurisdictional pre-nuptial agreements and cases involving trusts and business assets in Jersey. Barbara is also well-known for her significant children law practice. She represents both adults and children in private and public law cases and has expertise in international relocation cases, financial applications by and on behalf of children, child abduction, surrogacy and adoption in addition to the more usual applications in respect of who children live with and have contact with, including grandparents and wider family members.

In addition to being recognised as being one of the leading family lawyers in Jersey, Barbara is also at the forefront of developing family law in Jersey, particularly the separate representation of children and divorce reform. Barbara is also closely involved in exploring changes in the law relating to surrogacy in her role as a Jersey Law Commissioner. Barbara has had articles published in Family Law, International Family Law, the Jersey and Guernsey Law Review. She has also contributed chapters on Jersey law to Family Law Jurisdictional Comparisons (Thomson Reuters) and International Relocation of Children (Practical Law).

Barbara has a BA (Hons) Law degree from Trent Polytechnic (Nottingham Trent University) and an LLM in Welfare Law (with distinction) from the University of Leicester. She qualified as an English solicitor in June 1998 after training with Brethertons Solicitors in Rugby, becoming a partner there in April 2002. In September 2007 Barbara moved to Jersey to set up the Family Department at Hanson Renouf (subsequently Benest Corbett Renouf and BCR Law). She became a partner in April 2011 after cross qualifying as a Jersey advocate in September 2010. Barbara co-founded Corbett Le Quesne with Advocate Nicholas Le Quesne in November 2017. Barbara is also a qualified collaborative lawyer, a civil and commercial mediator, a family mediator, a family law arbitrator (both finance and children) and qualified in direct consultation with children in mediation. She is a member of the Law Society of Jersey’s Children Panel and Mental Health Panel.

Barbara is married with five grown up children.